Obesity is an increasing health problem worldwide. The World Health Organization predicts that by 2015, 2.5 billion people will be overweight (body mass index (BMI) ([weight (kg)/ (height (m)) 2]) >25, and 700 million adults will be obese (>30).(1) No universally accepted definition for obesity exists but there is general consensus that BMI levels above 25% for adults are considered overweight and over 30% considered obese. Adult men and women should maintain BMI levels between 18% and 24.5%.(2) Excess weight is a major risk factor for a wide range of chronic diseases and exacerbates hypertension, dyslipoproteinemia, osteoarthritis and other musculoskeletal problems.(3)

According to the World Health Organization (WHO) instances of obesity are on the increase in the United Arab Emirates. In 2005, over 75% of women over 30 in the United Arab Emirates were classified as overweight, with similar estimates for men.(4) The adverse health outcome of excess weight places an increasing burden on our health care system.(5,6) Being overweight is highly resistant to intervention(7) and it is doubtful that we are any closer to a solution today than we were decades ago. In fact, we appear to be moving away from, rather than towards, the national objectives according to data from National Health and National Examination Survey, NHANES III.(8) Until now, no intervention has been shown consistently to achieve true weight control. Although the precise reason for the high relapse rate is not known, the stunning uniformity of these findings, which now extend over nearly five decades, should give pause to anyone who proposes to treat, much less cure, obesity.(9) However, recent advances in technology show that obesity is associated with a low-grade inflammation of white adipose tissue stemming from the chronic activation of the innate immune system leads to further weight gain, insulin resistance and diabetes.(10) As food intolerance/sensitivity is one possible cause of this low-grade inflammation, we decided to investigate the hypothesis that the adherence to a food intolerance elimination diet improves weight in refractory patients. The method used for determining the diet related triggers of this inflammation in this study is the Alcat Test.

There is evidence demonstrating the Alcat Test to be effective in improving body mass index (BMI) and/or scale weight. According to a Baylor University study, “As compared to following a plan of their own choosing, participants who followed the Alcat Test plan achieved rather dramatic changes in their body composition.” This experiment showed that 98% of the subjects following the Alcat Test plan either lost scale weight or improved their body composition.(11) Dr. J.R. Cabo-Soler, Chief of Biochemistry at the University of Valencia, reported that iso-caloric food elimination diets, based on Alcat Test results, promoted enhanced weight loss, comprised more of adipose tissue, rather than muscle mass, as determined by DEXA studies in a population of refractory weight loss subjects.(12) The Alcat Test has demonstrated a reproducibility of 94.94%, according to a trial by Steinman et. al at the University of Cape Town.(13) 92.0678% reproducibility was reported by Neetling et. al. at the University of the Free Orange State, also
in South Africa, which makes it an acceptable screening model for intolerance testing in humans. In Addition, a Norwegian study reported the Alcat Test to be >90% reproducible.(16,14) Fell et. al reported an 83.4% correlation between Alcat Test results and double blind oral challenges as determined by careful clinical evaluation in statistically significant number of patients exhibiting food
sensitivity related symptoms, such as migraines, irritable bowel syndrome, eczema and other conditions, that are often observed as co-morbidities in obese patients.(15)

Despite mounting evidence of the efficacy of the Alcat Test in reducing obesity and the overall activation of the immune system, there have been no studies of the weight loss benefits of the Alcat Test reported for an Arab population. The purpose of this study was, therefore, to determine the effectiveness of the Alcat Test as a weight loss tool in Arab patients who had experienced difficulty achieving goal weight by calorie restriction.

This study was designed to determine whether people who could not lose weight on a low calorie diet could achieve their weight loss using the results from Alcat Test. A group of 27 patients with 14 males and 13 females with mean age of 42.77± 6.23 Years and with mean height of 168.66 ± 2.09 cm with obesity who had difficulty losing weight when they adhered to a reduced calorie diet were evaluated for specific white blood cell food induced reactions. (Table 1) Patients were exhibiting multiple symptoms including: obesity, gastrointestinal reflux, chronic fatigue, headache and other chronic disorders associated with food sensitivities.

Citrated blood is diluted 1 in 5 with buffer and approximately 90?l is added to each test agent well. The test agents are diluted preparations of food extracts (standardized for potency) bonded to the bottom of the well. Following 45 minutes incubation at 37 ° C with constant agitation, the test agents are incubated for a further 30 minutes at room temperature. Red cells are lysed by adding an azide free, electrolytic solution containing an lytic reagent, “ALCALyse”, supplied by Cell Science Systems, Ltd. Each test agent is then analyzed in sequence using the ROBOCat II particle counter (also manufactured by Cell Science Systems, Ltd.) with one control for every 10 food items tested. The 100 foods tested are shown in Table 2.

The basis of the Alcat Test is the measurement of changes in white blood cell size/volume following incubation with food and other test agents using the ROBOCat II linked to a computer. Contact between foreign entities and whole blood can cause autolysis, a phenomenon known as autocytotoxicity, and other cellular reactions.

There are three mechanisms which cause this phenomenon, and one does not require the priming of cells in vitro by either antibody or antigen(17).

Table 2: List of Food agents used by the Alcat Test in 27 patients with obesity 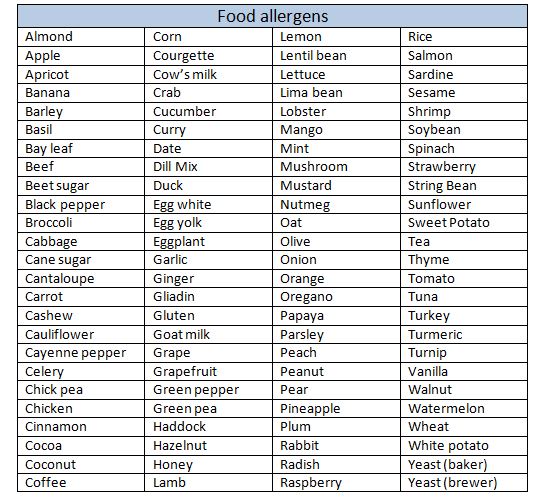 It was on this basis that an automated method was sought which would not only be reproducible and objective but would directly correlate with in vivo food challenge.

The computer is programmed to compare cell cultures incubated in the presence of food agents and measure a shift in cell volumes related to exposure to the test agent.

In keeping with standard laboratory practices, deviation in the test histograms, when compared with a control (identically treated but lacking the test agent) that exceeds one standard deviation (SD) is regarded as a positive reaction, and the patient is advised to avoid that food.

Table 3: The body weight of 27 patients before and after 12 weeks of following the Alcat Test diet plan 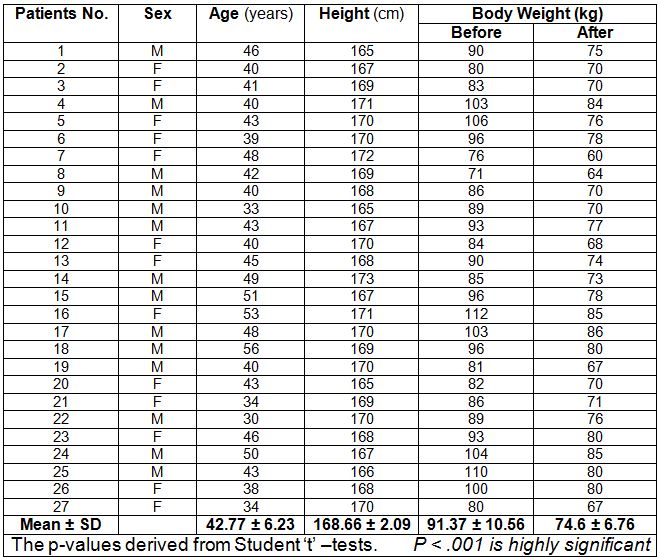 Table 4: The total body fat percentage of 27 patients before and after 12 weeks of following the Alcat Test diet plan 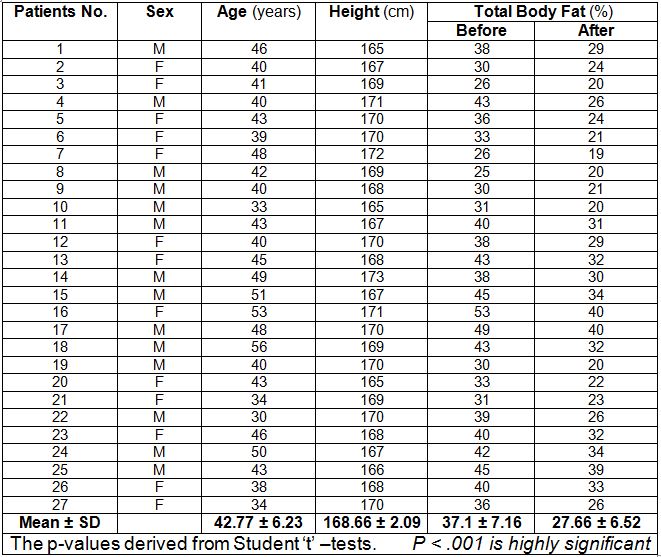 Table 5: The Body Mass Index of 27 patients before and after 12 weeks of following the Alcat Test diet plan 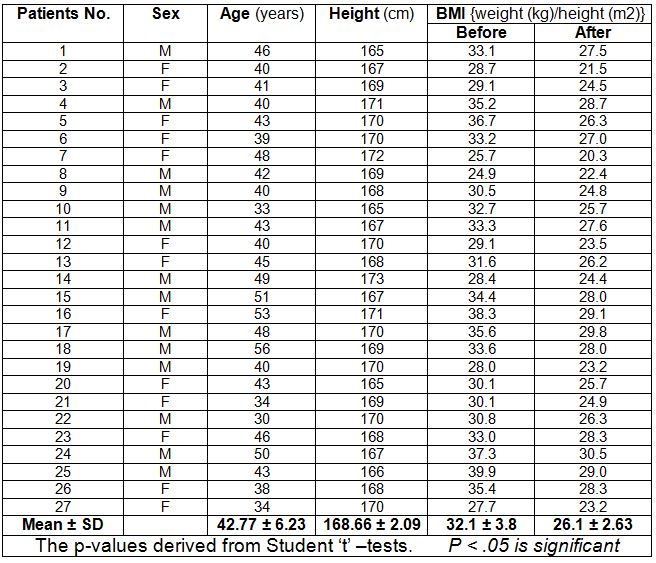 In this study, we demonstrated the beneficial role of Alcat Test in obesity. Correlations between obesity and Alcat Test results were positive and significant in these patients. All these patients had difficulty losing weight when they adhered to a reduced calorie diet; this study confirmed a greater weight loss in patients when they were placed on a diet plan according to the Alcat Test results. Also, the weight loss was mostly fat. Other interesting observations included, a better sense of well being and improved physical performance, improvement in abdominal bloating and digestive problems. These findings are significant because many overweight patients find it difficult to lose weight by cutting calories alone. This study suggests that delayed food hyper sensitivities may interfere with weight loss regardless of calorie restrictions. Also the beneficial effects of improved sense of well being and improvement of gastrointestinal conditions were observed collateral benefits consistent with an overall normalization of immune activity.

Obesity is a major public health problem among local Arab societies and more recently, among Asian countries as well. The associated health risks and diseases present a tremendous drain on the economy and affect the quality of life. The most effective program’s for losing and maintaining a desirable body weight with careful monitoring of proper diet should be implemented holistically to ensure a successful weight reduction program. Individuals need to be aware of the many myths and misconceptions surrounding weight control. Most ‘miracle agents’ for weight loss do not have a scientific basis. However, these data provide compelling evidence for the effectiveness of the Alcat Test diet plan in producing a positive change in body weight, body Fat and BMI and self reported disease symptoms. Thus our results confirmed the value of Alcat Test and the elimination diet in alleviating symptoms such as obesity, gastrointestinal reflux, chronic fatigue, headache and other chronic disorders associated with food hyper sensitivities.

We greatly acknowledge Haji Saeed Ahmed Al Lootah, Chairman, Islamic. Establishment, for his continuous encouragement and support throughout this study.