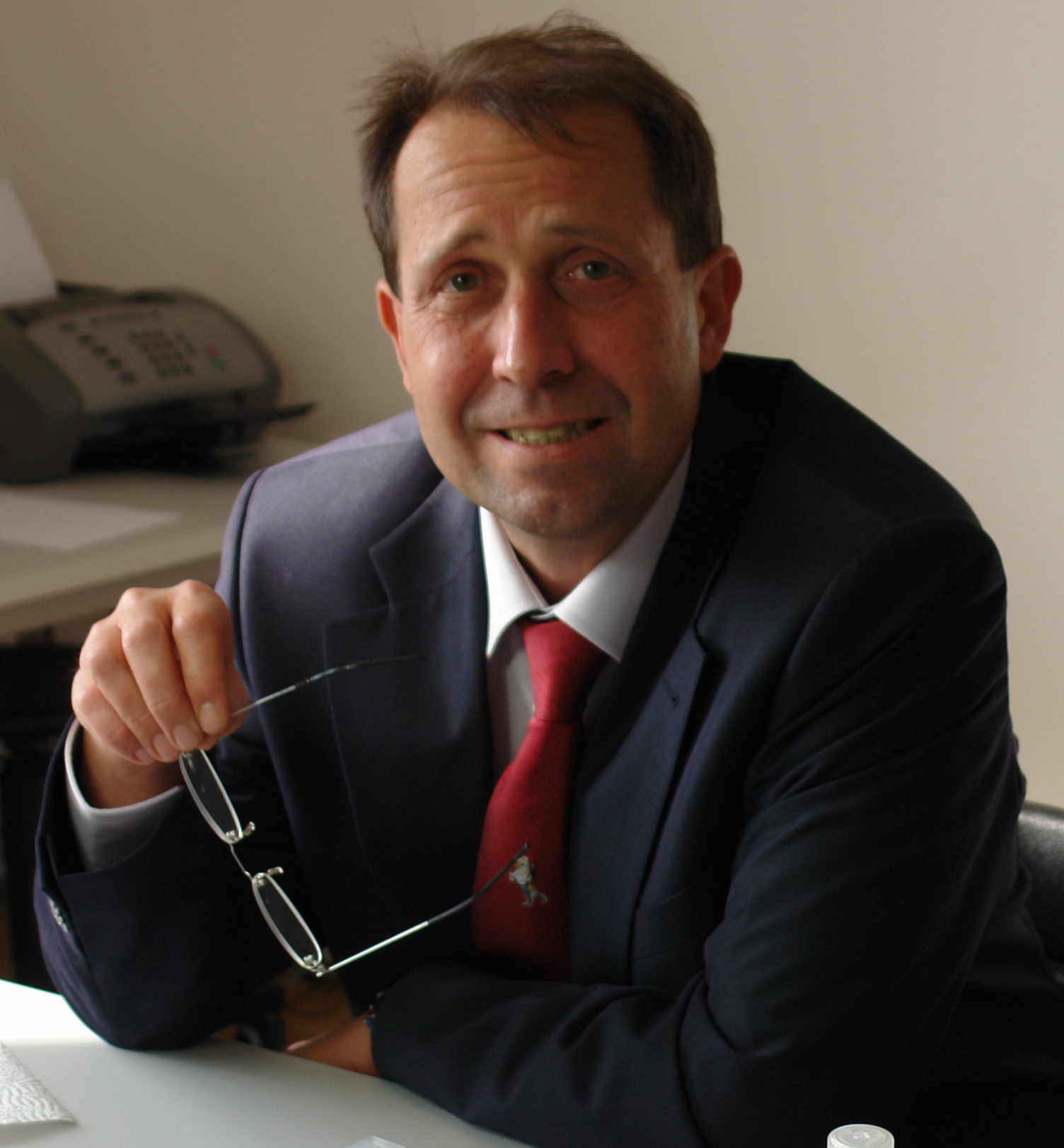 Dr. Dino Celeda holds a PhD in Biology from the Ruprecht Karls Universitaet, Heidelberg, Germany where he specialized in Human Genetics. Dr. Celeda’s experience includes a variety of prestigious positions such as Senior R&D Officer, Co-Founder and Director of Genetic Testing. Currently, he serves as the Scientific Officer for Cell Science Systems.

This article shows a few simplified steps on the importance of methylation and appropriate homocysteine levels and their connection to certain metabolic processes like glutathione synthesis, mitochondrial ATP production, oxidative stress and detoxification.  Moreover, it demonstrates how all these metabolic processes are interconnected and controlled by specific genes and how mutations (SNPs) in these genes influence these metabolic pathways. In addition, certain recommendations are proposed for targeted supplementation helping to “bypass” SNPs in those genes. This reveals the importance of an individualized treatment, including hints for personalized diet plans and personalized supplementation, leading to a functional medical genetic approach.

The gene methylenetetrahydrofolate reductase (MTHFR) with mutations at sites C677T and A1298C have been looked upon to play a major role in homocysteine balance1.

In reviewing the entire homocysteine/methionine cycle, other important genes are also involved in this process. Specific SNPs in these other genes can also alter homocysteine levels and methylation potential in the body (see table 1).

Supplementation: If SNPs in the MS gene are present, supplementation of the MS product, methylcobalamin is recommended.

MTRR encodes for methionine synthase reductase (MSR) and supports the MS (methionine synthase) in the remethylation of homocysteine to methionine 18. Its task is to keep the MS enzyme in an active form. After numerous reactions, the MS can become oxidized, thus losing the ability to attach the methyl group from the complex MS-methylcobalamin to its target, homocysteine. The MS enzyme has than to be reactivated in a so called “ping-pong” reaction by MSR. SNPs in the MTRR gene have been associated with elevated homocysteine levels (in combination with SNPs in MTHFR) and  increased DNA damage8.

Supplementation: If SNPs in the MTRR gene are present, the supplementation of SAMe (S-adenosyl methionine) is recommended. SAMe is used in this reaction as the reducing (activating) agent by MTRR.

Catechol-O-Methyltransferase (COMT) is responsible for the transfer of the methyl group from s-adenosyl methionine (SAMe). SAMe obtains (in an additional transfer reaction) its methyl group from methionine (see 3 and table 1) and donates this methyl group with the catalytic function of COMT to specific substances in the body for further biosynthetic processing (detoxification, regulation of metabolites…) 3,9,13.

COMT is one of the major key players in methylation and is involved in many reactions in the body, such as: drug metabolism/clearance, neurotransmitter regulation, gene expression (DNA methylation) and detoxification of a variety of environmental toxins. Specific mutations in the COMT gene are described with a reduced activity of the resulting enzyme, leading to reduced methylation, thus lowering methylation potential of the patient.

AHCY is the only mammalian enzyme known to convert AdoHcy to homocysteine. Relevant SNPs in this gene have been associated with impaired function and elevated AdoHcy concentrations, influencing the methylation potential. Studies show that these specific SNPs are the cause of poor methylation potentials and are associated with severe myopathies, developmental delays and hypermethionemia.

Supplementation: If SNPs in AHCY are present, the supplementation of nicotinamide adenine dinucleotide (NADH) is recommended. NADH serves as a co-factor of the AHCY enzyme in this reaction.

The success of personalized supplementation and/or treatment is monitored by homocysteine blood levels. Therefore, periodic homocysteine monitoring is recommended to assure and maintain treatment progress.

Homocysteine has mainly been looked at to be involved in methylation processes.

However, homocysteine has an additional important task. It is the template for the important  antioxidant glutathione and pyruvate (salt of pyruvic acid), which is used in the Krebs cycle.  In the trans-sulfuration pathway, homocysteine is converted to the intermediate compound cystathionine by the enzyme cystathionine-?-synthase (encoded by the CBS gene). In an additional step, cystathionine is converted to the amino acid L-cysteine by the enzyme cystahionine- ?-lyase encoded by the CSE gene. In both reactions, vitamin B6 (pyridoxal phosphate) serves as a co-factor14.

L-cysteine serves as a template for the following reactions:

In this situation, supplementation of vitamin B6, L-cysteine, L-glutamate and L-glycine is recommended in order to support the important biosynthesis of L-cysteine and glutathione.

Up until now, the connection between homocysteine, methylation and the synthesis of glutathione, pyruvate and NADH has been presented. The question is, how are these 3 important topics of the body connected to each other and how do they interact?  Table 1 represents the pathway of these 3 processes and also shows a 4th topic: the detoxification of electrophilic compounds like metals by glutathione, genetically controlled by glutathione-S transferases (for example GSTM1)4.

Let’s go to mitochondria. The main task of mitochondria is to produce ATP, the energy source of the body in a biosynthetic pathway called oxidative phosphorylation. One of the major compounds involved in ATP production is NADH. NADH is obtained from pyruvate in the Krebs cycle, which has been produced from L-cysteine.

NADH serves in the oxidative phosphorylation (ATP production) as an electron donor in conjugation with oxygen serving as an electron acceptor. Their interaction produces the energy rich compound ATP, necessary for mostly all cellular processes as an energy source. However, for each molecule of produced ATP, two superoxide anions (O2.–) are generated. This is the point at which glutathione comes into play, synthesized in the homocysteine/L-cysteine pathway.  In a two step reaction (see table 1) O2.– is broken down by the enzyme superoxide dismutase 2 (SOD2) to hydrogen peroxide (H2O2). In an additional step, the enzyme glutathione peroxidase (GPX) breaks the H2O2 to water. The enzyme GPX uses glutathione here to transform cytotoxic H2O2 to water 15.

Specific SNPs in SOD2 and GPX lead to reduced enzyme activity causing elevated levels of oxidative stress. If SNPs in these genes are present, the supplementation of manganese (Mn), copper (Cu), zinc (Zn) and selenium is recommended. These trace minerals are co-factors of superoxide dismutase’s and glutathione peroxidase. Additional supplementation of L-cysteine, L-glycine and L-glutamate can be recommended if SNPs in the major genes of the glutathione synthesis (CBS, CSE, GCLC and GCLM) are present 14.

Supplementation of L-cysteine, L-glycine and L-glutamate can be recommended if a person lacks the GSTM1, especially if SNPs in the major genes of the glutathione synthesis (CBS, CSE, GCLC and GCLM) are present4 .

This article is intended to give a short overview about the importance of homocysteine/methionine balance for essential metabolic processes. It has to be pointed out that homocysteine is not a toxic substance, as it is sometimes stated. Homocysteine serves as a template for the genetically controlled biosynthesis of a great number of essential substances in the body. Therefore, it is of high importance to keep homocysteine at appropriate levels in order to guarantee a healthy and normal flow of important metabolic processes. 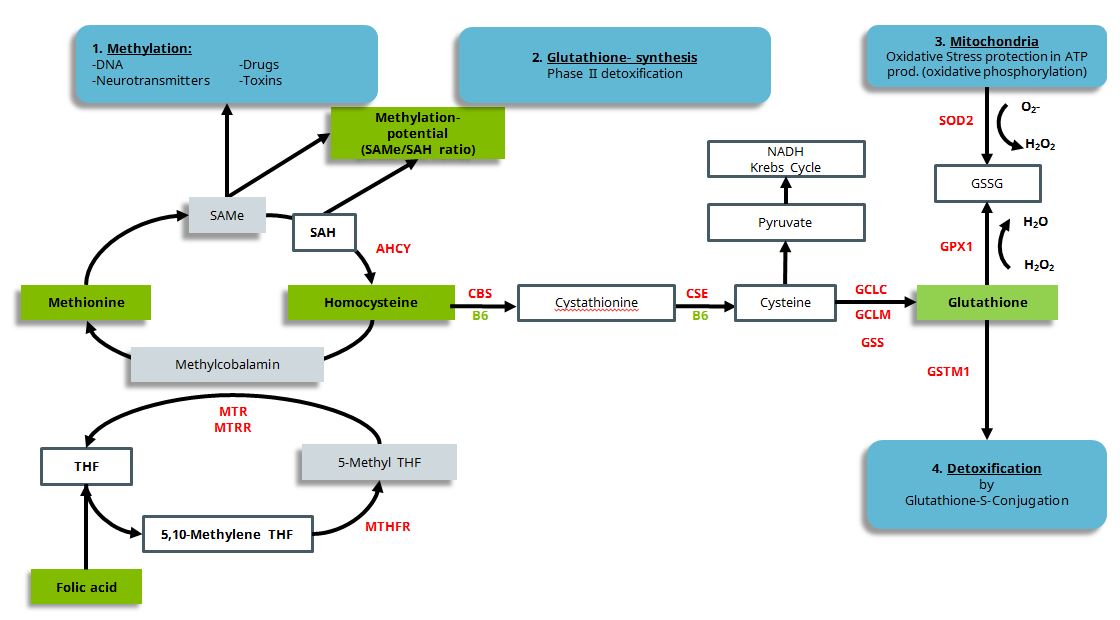