I have had a new nurse present with chronic asthma so bad that she couldn’t speak in complete sentences. She was taking maximum therapy and was still not in control. After adjusting her diet based on Alcat testing, her asthma cleared completely and she was able to stop all medications. I assume this saved her insurance carrier at least $4,000.00 per year.

Have you ever wondered why you are feeling weak when you catch a cold? It is because the body needs its energy to fight the invader (virus). The Alcat Test indicates that the same innate immune cells that fight bacteria, viruses or toxic substances (primarily the Granulocytes) can attack food particles and thus can initiate inflammatory cascades on the cellular level.

Respiratory diseases are usually inflammatory conditions, and are triggered  by external factors such as viruses, fungal spores or bacteria. However, there is strong indication that the food intake strongly influences the condition. This makes sense: I can manage my food intake and thus help to minimize the inflammatory reactions of these involved immune cells.

Asthmatics may benefit greatly from diets based on the elimination of potential intolerogenic (=pro-inflammatory) foods according to the Alcat Test. In an observational study by Dr. L. Hoj et al. in 1998, 96% of asthmatic subjects experienced improvements with the Alcat program. A total of 353 people with multiple symptoms such as gastrointestinal, eczema, migraine and asthma were among others tested for food intolerance and chemical hypersensitivity. Of 27 asthmatics 19 people improved strongly, and 7 people noticeably mild. Only one person had no improvement (find link below).

Research shows that adherence to a personally customized Alcat program for 3-6 months may help the immune system normalize, relax and strengthen. Other sources  of “hidden” triggers, such as  environmental chemical  that also might be of great benefit for respiratory problems and commonly are found in the environment, include cosmetics, shampoo, toothpaste, cleaning supplies pesticides and fertilizers, exhaust fumes and others. Such substances may be intolerogenic or irritants that trigger reactivity in the already sensitized asthmatic lung.

Asthma is a chronic inflammatory condition characterized by bronchi-constriction, increased mucus production, swelling of the tissue in the lung and irritation to nerve endings. Bronchial spasm and congestion may result from exposure to certain stimuli from the environment or internal stimuli. This leads to coughing, wheezing and shortness of breath.

In a recent study scientists have demonstrated how the activation of the innate immune system in asthma and allergy may be mediated 1. A protein in house dust from the house dust mite was identified, which directly activates immune cells of the innate immune system via receptors but without antibodies (link to Immunology Alcat Test). This type of activation of the immune system without the aid of antibodies is an area that is being investigated.  There are still large gaps in our understanding of the complex interaction of innate and specific immune systems 2, 3.

Sulfites and sulfating agents in foods (found in dried fruits, prepared potatoes, wine, bottled lemon or lime juice, and shrimp), and diagnosed food allergens (such as milk, eggs, peanuts, tree nuts, soy, wheat, fish, and shellfish) have been found to trigger asthma 4. Many food ingredients such as food dyes and colors, food preservatives like butylated hydroxyanisole (BHA) and butylated hydroxytoluene (BHT), monosodium glutamate, aspartame, and nitrite, have not been conclusively linked to asthma 5.

An allergy test may show whether specific IgE antibodies are involved, i.e. (classical food allergies). Further cellular immune responses that emanate from the non-specific immune system can be identified with the Alcat Test (food intolerance or chemical hypersensitivity). Since intolerances don’t show acute reactions they are not so obvious. Therefore, a food- and chemical scan might be extremely useful in the process of identifying such triggers.

A runny nose is familiar to everyone. Rhinitis is an acute or chronic inflammatory condition, which is mostly caused by viruses but allergic;pseudoallergic mechanisms are possible, too. If the symptoms are perennial it could be caused by food intolerance. However, this is called perennial rhinitis or allergic rhinitis. A healthy lifestyle and the avoidance of offending potentially pro-inflammatory foods may help to control overall toxicity in the body.

Inflammation of the sinuses can develop from a cold. The first watery, later thick mucus obstruction settles in the paranasal sinuses and the frontal sinuses. Symptoms such as dry mucous membranes or a feeling of pressure in the cheek bones and above the eyes are associated with this condition.

Bronchitis is an inflammatory condition of the bronchial tube. It can be acute and chronic. In acute bronchitis the inflammation is caused by viruses, bacteria, fungi or irritants (dust). Coughing, mucus and fever are characteristic. In chronic bronchitis, permanent coughing and sputum is observed and may be triggered by foods.

Effectiveness and validation of the Alcat Test

Beginning in 1988, and carrying through to the present, several clinical studies have been performed to evaluate the effectiveness of the Alcat Test. Some of which were “double-blinded*” to see how well the test results correlate with actually eating the food.

A valid test for food intolerance should show the effect of food substances on those cells of the immune system which are associated with the inflammatory process.

(Note to us: it would be good to link to references that link neutrophil activation to certain disease conditions, LINK to Alcat Test immunology section?).

If the test results are valid there should be in a concordance with symptoms (e.g., gastrointestinal complaints), and correlate with double blind oral exposure.

(*Double-blind studies: To obtain an unbiased outcome the study must be carried out in double blind fashion wherein neither the doctor (investigator) nor test subject knows whether the food they are re-introducing has been indicated by the blood test as being either positive or negative. The test results are evaluated to see if they correlate with this, the, “gold standard” – a double blind oral challenge. This is a rigorous and time consuming protocol that yields an objective evaluation of both the sensitivity and the specificity of the test.)

Why is that important?

Scientists have shown that in patients with irritable bowel syndrome, atopic eczema, allergic rhinitis or migraine the Alcat Test can detect those foods that cause the above symptoms. The Alcat Test has shown high correlation with double-blind oral challenges: 83.4% with foods and 96% with food additives.

Reproducibility of the Alcat Test

A second Alcat reproducibility study was conducted at the University in Bloemfontein, South Africa by Dr. WML Neetling and Dr. AM Kachelhoffer, January to April, 1998.

The study analyzed 10 consecutive patients. Of these, 2 patients had no prior allergies. The balance report­ed various symptoms such as migraine, asthma, and IBS. Using the Alcat Test, 1,300 analyses of 4,989 data points were performed, testing responses to 130 an­tigens. The study demonstrated 92% reproducibility. 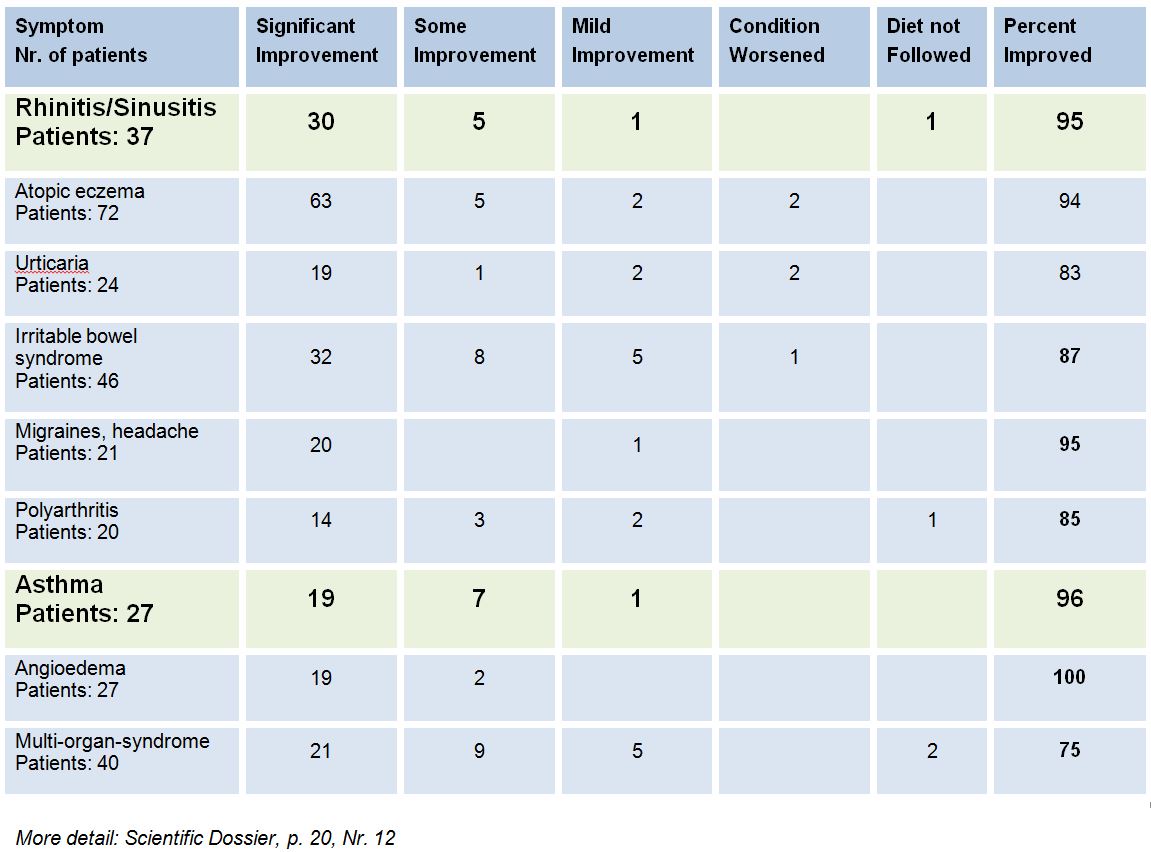 This randomized study followed 274 patients with different symptoms who adhered to a diet plan based on their individual Alcat Test results. The percentage of patients that experienced improvement or complete recovery from their health complaints was as follows:

Mylek et al., Rocz Akad Med Bialymst. 1995; 40(3): 625-629: This study followed 72 patients with complaints thought to be attributable to food intolerance. They were prescribed elimination diets based on their Alcat Test results. The results of the study showed an overall improvement in symptoms (number of patients expressed as a percentage) for

The investigators concluded that an elimination diet based on this non-invasive method can significantly improve the symptoms of various ailments. In their experience, symptoms resolve in in 50-83% of patients following an Alcat informed diet. 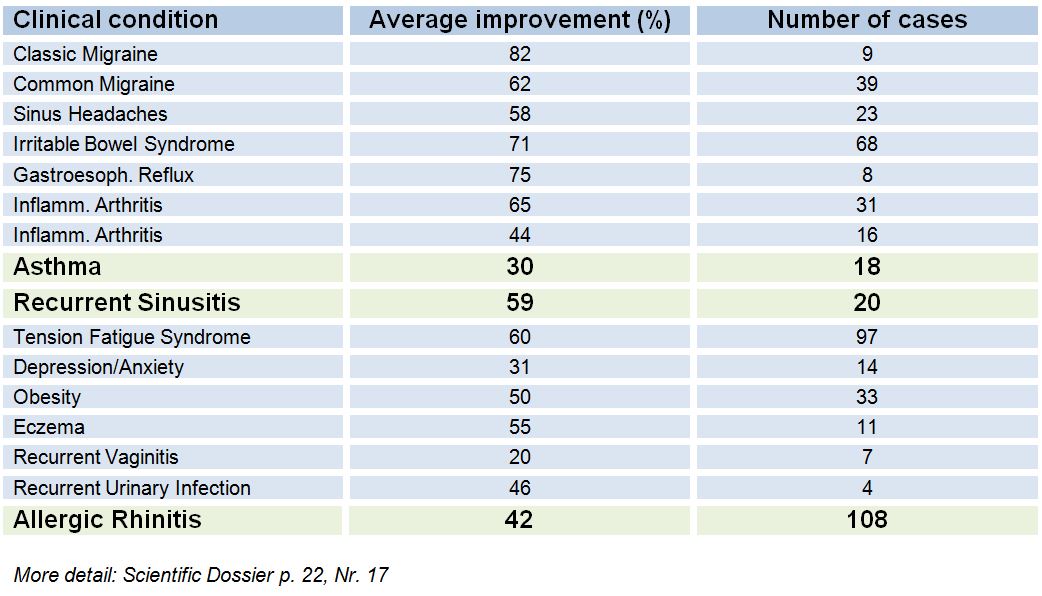 Conclusion: The results of the Alcat Test, designed to find non-IgE mediated reactions to foods, was ev­idenced in the determination of positive results to major food antigens in the 7 children with non-atopic disorders. The results of our study have shown that in non-at­opic subjects, the Alcat Test in all cases, revealed a positive reactivity to the basic foods in children with clinical manifestations related to a food allergy or in­tolerance. In conclusion, the Alcat is also useful for preparing a dietary program which simplifies the job of the clini­cian in establishing accurate elimination diets and ex­clusions, and finally the Alcat results (positive or neg­ative) were correlated with the food challenge test in a considerable number of cases.

Investigator Mylek D studied 72 patients who followed an Alcat based elimination diet; they had significant improvement in their symptoms that included arthritis, bronchitis and gastro issues. Specifically, they found improvement in 83% of arthritis patients, 75% of Urticaria, bronchitis, and gastroenteritis patients, 70% of migraine patients, 60% of chronic fatigue syndrome patients, 50% of asthma patients, 49% of AD patients, 47% of rhinitis patients and 32% of hyperactivity patients.  Patients were also skin tested for IgE allergy to inhalants and foods that were more pronounced in skin and nasal symptoms. Published in Advances in Medical Sciences; Formerly Roczniki Akademii Medycznej w Bia?ymstoku Volume 40, Number 3, 1995.

preservatives and colorants in the pathogenesis of allergy and asthma. Int Arch Allergy Immunol.